D2 (Group B): Dijon validates its historic rise in D1 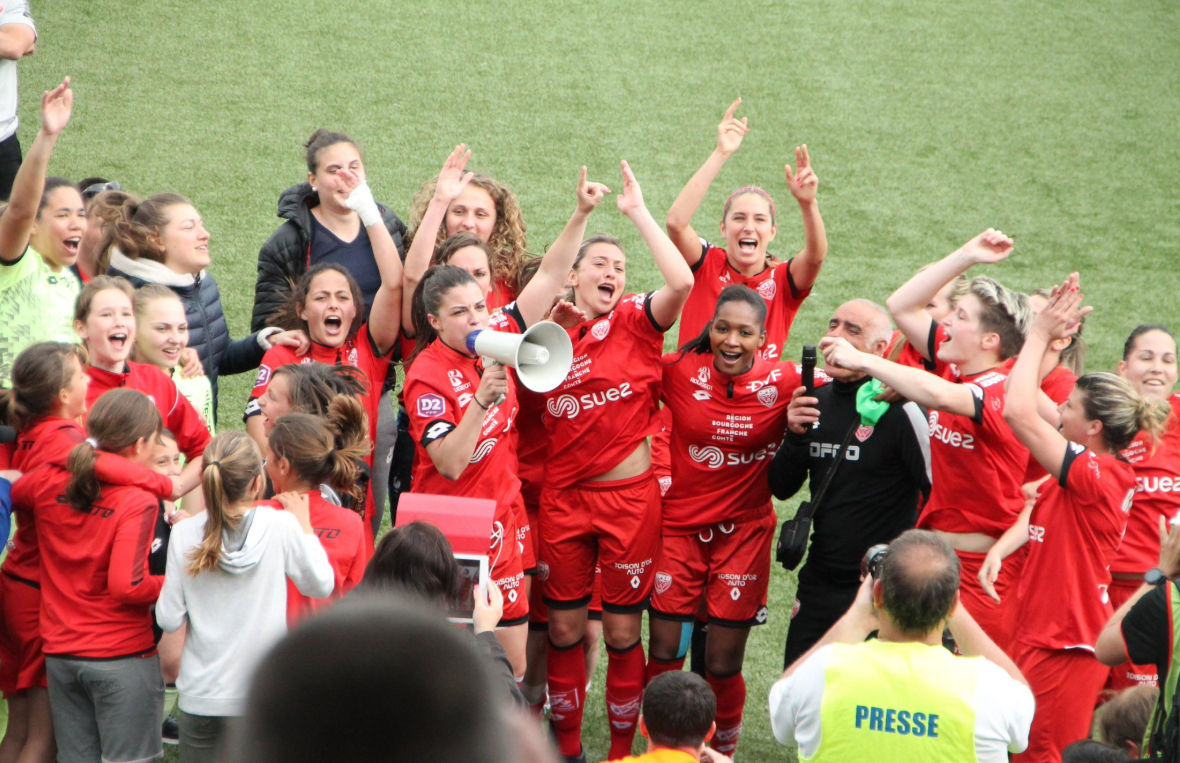 This afternoon, the DFCO validated its rise in the elite of women's football by winning 4-0 against Croix de Savoie / Ambilly. The players of Yannick Chandioux have validated their ticket for the first division in front of their public and have celebrated as it should be this historic success.


The live match (The Public Good) => The Dijonnaises in D1!


After a 3-0 victory in the first leg, we could expect a formality match for the Dijonnaises at home in front of the hundreds of spectators present for the event. However, from the kickoff Ambilly wants to pose problem in Dijon with this first free kick, but Mainguy (1st) wins in the air to recover the ball.

Then the Dijonnaises answer through Tatiana Solanet (5th) who pushes a little too much balloon and who ends up being recovered by the keeper of Croix de Savoie. The Alpines on corner will still have an opportunity to open the mark, but Mainguy (6th) is again in the air to grab the ball.


Dijon continues its march forward with Baldé, the major offensive asset of this Dijon team. The player passes three opponents and gives Bouillot (7th) but his shot is not powerful enough to worry Brosnan. Bouillot then combines with Cuynet, but the pass of the latter is too long to be cut by Bouillot (9th). The public is pushing to support the Dijonnaises.

Croix de Savoie does not show any complex in this match and hopes the surprise victory against Dijon. But the Dijonnaises have long teeth and want this success to access the D1. As on this big opportunity well led by Baldé who fixed his opposite and serves Bouillot in the meantime. Bouillot (13) wants to pass his ball to Atamaniuk alone at the far post but his pass is intercepted by the opponent.


The opportunities will follow each other only in the direction of Dijon, as Baldé's scissors (18th) pass one meter away from the opposing goal. Dijon clearly dominates this start of the match, with a disconcerting ease and it will eventually pay. At the half-hour mark, the side Charlyne Horn performs a volley following a corner, which is taken from the head by Trevisan, and that Brosnan deviates on its transverse. But the ball returns to Horn (30th) who places a flip, which ends under the bar 1-0.

Just two minutes after the opener, Croix de Savoie was close to equalizing. Following a badly returned balloon, Ngono (32nd) is in ambush and Trevisan releases on his own goalkeeper the ball, which ends in the small outside net. Big fright for Dijon, while the corner will not give anything. An error that will also restore the hair of the beast to the Dijonnaises who will make the break through the untenable Tatiana Solanet (34th). The player is perfectly launched in the depth of the left lane and uses his speed, takes full axis and opens his foot perfectly to deceive Brosnan 2-0!


But Dijon reiterates the same mistake just after this second goal leaving the free field to the Croix de Savoie. Mainguy misses his exit at the penalty spot and Browne (36) alone against the empty goal, sees a back Dijon clear the ball in extremis. Errors that could cost more in D1. But Dijon also knows how to be realistic and it is a great asset for the elite.

As these two attempts of the neo-Dijonnaise, Elodie Nakkach (40th) close to aggravate the score. On a good delivery of Bouillot right side, the player tries a shot that passes just above the frame. Then again, two minutes after her first attempt, she reiterates but it is not framed. Dijon has possession and score in his favor and will weigh down the mark just before the break. On a corner perfectly hit by Solanet, Cuynet (44th) placed a crossed head that sits at the bottom of Brosnan's goal 3-0. The victory seems already won, but Dijon can still hope for some goals and will have to keep his own inviolate to prove his supremacy.


With three goals in fifteen minutes, Dijon did not make a quarter against his opponent of the day and in front of his audience who already scande the slogan of the day "we are in D1 we are in D1". In the second half, Dijon wants to continue doing the show. And it is Baldé who initiates the hostilities. The player strikes at the entrance to the left and center surface for Bouillot (48th) at the back post, but her recovery is out of frame.


The match is played, Dijon blows


Supporters of the Croix de Savoie have also come to support their players, but that does not seem to disturb more than that the Dijonnaises. The players of Yannick Chandioux will even go for their fourth goal. Laura Bouillot (54), number 9 of the DFCO perfectly places her head at the reception of a center from the right and confirms the victory of Dijon just before the 4-0.Croix de Savoie wants to save the honor, Ngono (57) on the edge of the offside and who was alone in front of Mainguy, has just been stopped by Trevisan. Then Baldé (61st) retorts with a wrapped shot that passes right next to it. After that, Trevisan and Atamaniuk (64th) have to get together to stop Browne. We find again Solanet (66th) who regales as usual. The player takes the left side, overflows and serves Bouillot in the area, but his first-strike shot goes over. The last opportunities will again be on the side of Dijon. As this cover of Baldé (67) who does not find the bottom of the net, this occasion Bouillot (74) released in extremis on his line by Fillion or this distant attempt Nakkach (82) that passes over the skylight Cross of Savoy. The match gradually loses its intensity, due to the commitment made by Dijon in the first period. The referee whistles the end of the match and the rescue for Dijon who can finally celebrate his accession to the D1 after a long fight with ASSE or Nancy for the climb. In the other group, it was Metz who assured his rise in D1, April 21 last. Match sheet Referees: Naima Khettou, Adrien Garot and Jean-Philippe Hosdez Warnings: Ouinekh (37th) Dijon: Mainguy - Trevisan (cap. ), Rousseau, Gouineau, Horn (Magnin-Feysot 79th) - Atamaniuk, Cuynet (Cousin 59th), Solanet, Baldé (Josserand 73rd), Nakkach - Bouillot.Banc: Bigey and Blais.Croix of Savoie Ambilly: Ouinekh, Jung, Ngono Mani (Deutsch 77th), Doyle, Messomo, Brosnan, Von Potobsky, Baisden, Fillion, Browne, Gutsche (cap.). Bench: Fitzgerald, Sallaz, Zongo, Healy.Photo: Dijon