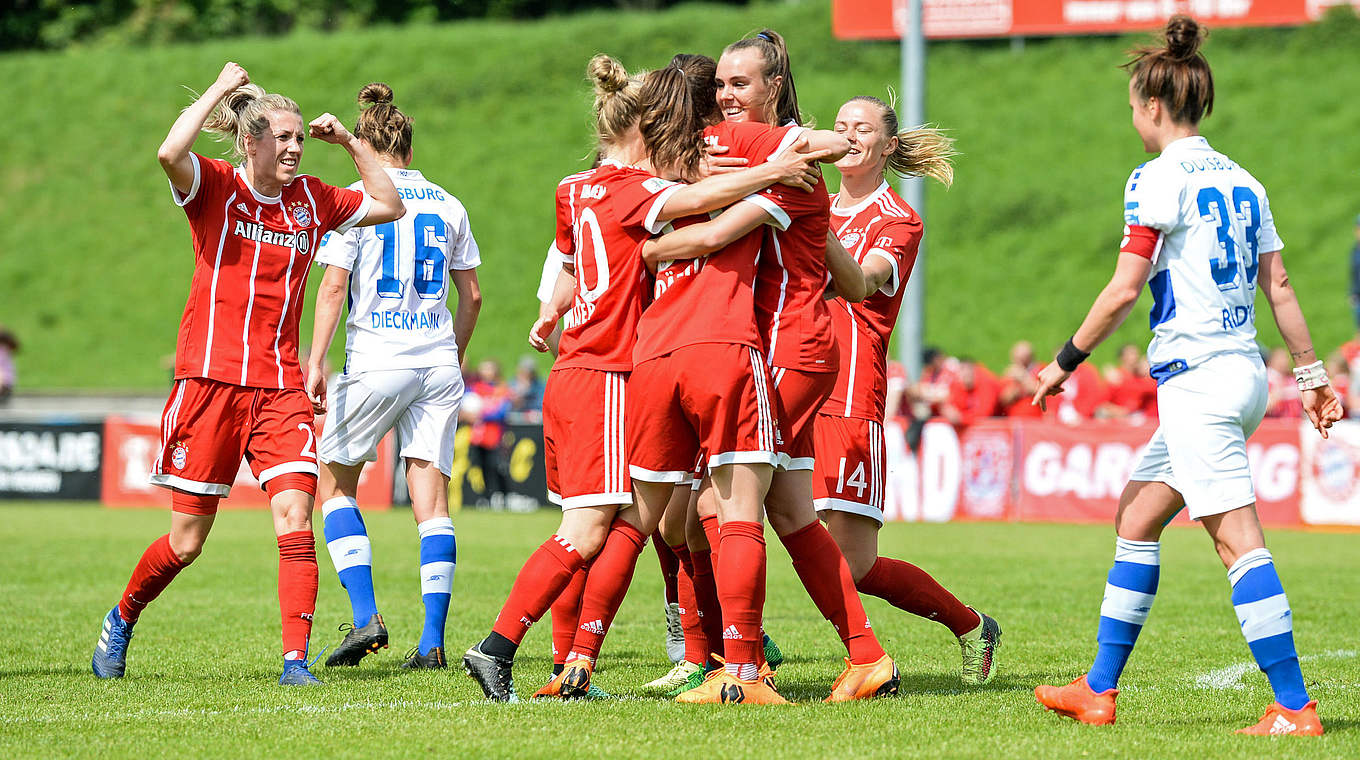 While Wolfsburg qualified for the Champions League final, five matches were played this Sunday in the Bundesliga. Bayern regain ground on Potsdam in the race for Europe, waiting for Wolfsburg-Freiburg on 9 May. In the bottom of the table, the gaps are still narrowing between the four teams with the lowest rankings.

Last week, Bayern had to share points against the red lantern, Jena, allowing Freiburg and Potsdam to get closer to second place, qualifying for Europe. This weekend, the Bavarians have not let slip points on the lawn of the MSV Duisburg, another team in the struggle for maintenance.

Teammates Melanie Behringer won 3-1 with a goal scored by Sara Däbritz before the quarter-hour (14th). Bayern is still coming off the locker room thanks to Jill Roord (47th). A few minutes later, Duisburg back part of her delay through Kathleen Radtke (55) but is reduced to ten in the wake after the expulsion of Marina Himmighofen (second yellow).

Even outnumbered, Duisburg remains in the game until Fridolina Rolfö seals the win in favor of Bayern (83) at the end of the game. These three points are all the more welcome as at the same time, Potsdam lost at home to Essen (1-2), and is now five points behind Bayern. The two teams will meet again in a week in Bavaria during the next day of the championship.

Potsdam beat, while Svenja Huth managed to open the scoring in the first half on a ball by Sarah Zadrazil (24th). A first period dominated by the Turbine players who have not managed to get off the board. After the break, Essen overturned with a double Linda Dallmann (46th and 48th), confirming his great form, she who was involved (scorer or decisive passer) on 10 of the last 14 goals of Essen in the league.

Potsdam loses valuable points in the race to Europe, although the schedule of the end of the championship in Germany could foreshadow other twists.


At the bottom of the standings, the end of the championship looks tight with four teams now standing in five points. Among these teams concerned by a possible downhill, Jena and Cologne met and separated on a draw and blank (0-0). A result that allows Cologne to temporarily out of the red zone, a point ahead of Duisburg, even if the two teams would probably have preferred to take the three points.

Like Duisburg, the Werder was inclined at home, against Frankfurt (0-1). A result obtained with a goal from Marith Priessen on corner at the approach of the hour of play. Frankfurt remains in sixth place, while the Werder Bremen two lengths before the first relegation Duisburg, and four before Jena, the red lantern. A situation that remains uncertain including three direct confrontations between these four teams in the next championship days.


In the last match of the weekend, SC Sand and Hoffenheim were neutralized by 0-0, keeping their respective seventh and eighth place. Wolfsburg will meet Freiburg on 9 May for the final match of the 18th day, but the Louves will also play on Wednesday at the Werder Bremen with the opportunity to take the lead in the Bundesliga.


Photo in one: Jan Kuppert